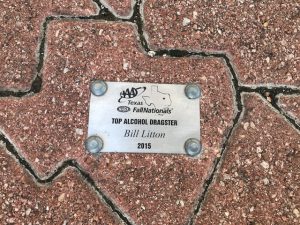 When the seasons change to Fall, that means one thing for Litton Racing, another chance to get back to Texas. Competing in Driver Litton’s home state of Texas is always a special event not only for the Team, but for the many family members, friends, and fans of Litton Racing that look forward to getting out to the track every year. First up, the Worsham Racing and Litton Racing Teams headed to Dallas for the AAA Texas NHRA FallNationals at the Texas Motorplex October 4th – 8th. At this very competition back in 2015, Driver Litton took home the Wally in the Top Alcohol division. 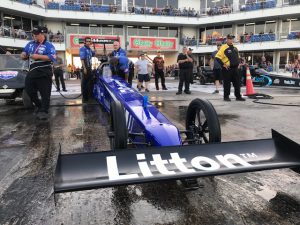 Driver Litton, Co-Crew Chiefs Chuck and Del Worsham, and crew members James, Todd, Mike, Glenn, Trey, and Seth were ready to give it another go and hopefully score a Wally in the prestigious Top Fuel category.The team was ready to get in the action early during the 2nd round of qualifying on Friday night. The first run had Driver Litton straight down the groove to clench the number 10 spot. Per Co-Chief Chuck, “First one, we ran a 4.07 ET.  We were running well but broke the blower belt at seven or eight hundred feet. Coasting through for a run of 4.07.” 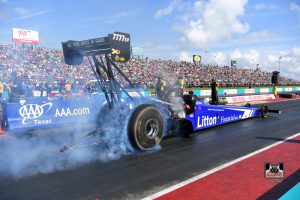 The team was in high spirits after a decent first shot and worked on the Blue Thunder into the evening to make another run during qualifying on Saturday. “We started out a great weekend with Bill on Friday night. The car came out and left decent. It slowed at the top end when we lost the blower belt. It would have been enough to qualify us, in the long run, but we took it out again Saturday afternoon”, said cylinder head tech James.

During the next qualifying run, Litton was straight down the groove to move up one spot and get off the bump spot with a 3.903 @ 318 MPH. Bill left great once again, he reached an outstanding speed of 318 MPH which is his top speed in this car.

“It was looking really good

going in Sunday morning,” said James. Driver Litton was moving on to the elimination rounds with a great showing in qualifying, placing him in the 15th spot. It was a familiar feeling for the team on Sunday morning. They were up against the goliath, Steve Torrence again, for the 1st round of eliminations for the 5th time this season.  Both cars launched hard, unfortunately, Litton had a fireball early in the run.

“In the first round, we had a piston that had too much compression in one cylinder. It broke leaving the starting line and blew up. It was a bit of a fiasco run. We are going to work on that and get ready for the next race,” said Chief Chuck. Crew member Ja 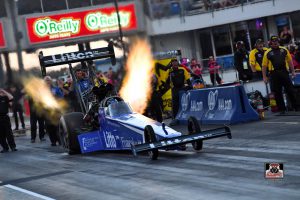 mes details the run, “The car started up with a great burn out, he got it backed up, got lined up in the groove. By 100 feet, the engine was not cooperating with Bill. He had to lift and get out of it after a small fireball from some rod and piston issues. He did a great job getting it shut off. We will go out next week and give it another shot.”
Another shot wouldn’t be too far in the distance as the team was planning to compete the very next weekend at the Texas Motorplex for the Nitro Outlaws Drag Racing Series Finale. Unfortunately for the fans, Mother Nature was planning a visit to the track as well. After hours of rain and three tornados on the ground near the track, the race was officially cancelled with the beautiful Nitro Outlaws World Championship trophy being awarded to the existing points leader. It was hard to swallow for Litton and team members who were hungry to bring it home. 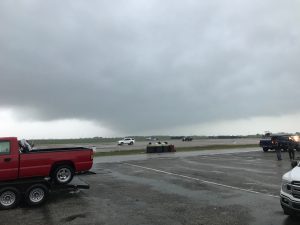 The 2018 Mellow Yellow Season is winding down and the team is wide eyed focusing on a chance to win a Wally. Next up, Team Litton and Worsham Racing will be at their home track, The Auto Club Raceway in Pomona, California to round out the season back where it all started. The NHRA Auto Club Finals kick off November 8th and run until the 11th. Be sure to check in on our Twitter, Instagram, and Facebook pages for photos and updates from the track.

The NHRA projects total viewership of the Texas Fall Nationals to reach 1.3 million viewers through the FS1 Broadcasts. The Dallas race reached 2.04 million in social media video views during October 2nd – 8th alone. If you are in need of nationwide coverage that reaches millions of people, please contact us at info@littonracing.com
news