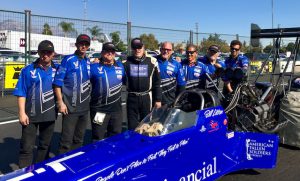 The team was back in California for the Final Event of the season. The Automobile Club of Southern California NHRA Finals at the Auto Club Raceway in Pomona took place November 9th – 11th. This is the home track for Driver Bill Litton and The Worsham Racing team.  Litton and Co-Crew Chiefs Chuck and Del Worsham, crew members Todd, James, Mike, Seth, Frank, Glenn, Trey, Paul and Matt, have had an amazing season and they were very much looking forward to putting it all out there for the finale weekend. 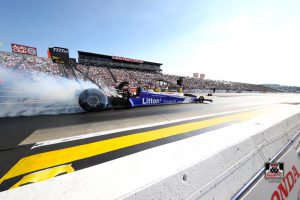 Litton Racing hosted many friends, family, and clients in the pits. Everyone got a chance to see Blue Thunder up close and experience what it’s like to be a part of this operation for the weekend. The look on people’s faces when they see and hear these motors warm up is always a great time for the crew. They worked tirelessly to show everyone what they are made of. 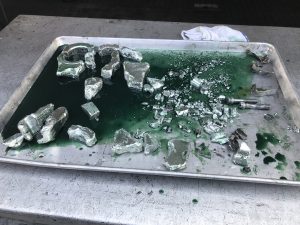 Typical to the rest of the season, they started with the intention to qualify deep into the field on the first qualifying run.  In Q3, with a match up against Mike Salinas, they experienced a very fiery round for both dragsters. Salinas launched hard but ended with a big fireball with a 3.79 @ 317 mph. Driver Litton was on a good pass until around 1/8th mile marker when a connecting rod broke causing the worst explosion of the year for Team Litton. With a run of 3.98 @ 270.43, Driver Litton held onto the 16th position and just squeaked by into the elimination rounds.
This was one of the h 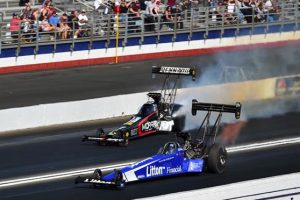 ardest rebuilds of the season for the team. Working hard into the night, the team made the turn around for Sunday. Per crew member Frank Gilchrist, “We had some motor gremlins that just tore the car up. We were still able to stay in the field. We knew after rebuilding the new motor, we would have to run the #1 qualifier Leah Pritchett.” Pritchett broke the event track record with 3.649 during qualifying on Friday, creating a buzz and igniting the fury for all competitors. During E1, Driver Litton and team were ready to take their shot against the 1st place qualifier.  Pritchett and Litton have each won 1 time against the other in prior events. Pritchett smoked the tires and crossed the centerline. Litton was straight down the groove with his quickest pass of the weekend for the win. With an ET of 3.97 @ 309 MPH, the 16th place qualifier took out the 1st place powerhouse.
“In the first round, Bill did a great job. He went through the procedures well and had a good light. He ran a respectable 3.97 straight down the tr 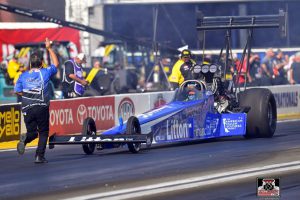 ack. Leah had some troubles and we got her,” said cylinder technician James Williamson. Pritchett was 10-0 in the first round when starting from the No. 1 spot. “We go out and do exactly what we planned on and Leah smoked the tires, so we beat her,” said Frank. The team was thrilled to be moving onto the next round and used that adrenaline to assist with the quick turnaround to the 2nd round.
Next up, Litton was facing a fa 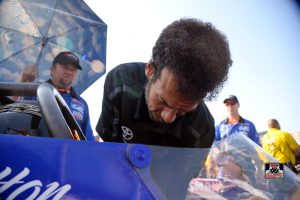 miliar Top Fuel heavy-weight, Tony Schumacher in the Army Dragster. “Go up for the 2nd round, and on the burn out, we broke some part in the reverser, stopping the car from shifting from reverse to forward. The car doesn’t have a transmission, but it does have a reverser. It looked dangerous. If it is not all the way in gear, it would over-rev and blow everything up. We made the decision to shut it off on the line. Giving Schumacher a bye run,” said Frank. This was not the ending the team was expecting. “Unfortunately, we had to shut the car off on the start line which was so disappointing for all of us, especially Bill. All in all, it was a good weekend, but we wish it would have ended better,” said James. 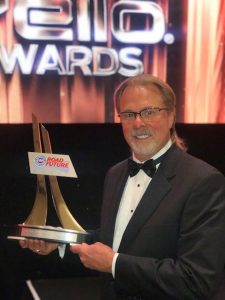 The 2018 NHRA season is officially over, but it was a year Driver Litton will never forget. “Bill’s driving has improved dramatically, and we have had a lot of fun. I don’t know if there are any top fuel cars that qualified for so many races with so few runs.” said Frank. Per James, “All of the time spent together, and the comradery was great.” The team is looking forward to 2019 and getting off on the right foot. They will be working hard over the winter break. Per James, “This dragster is going to come back next year and knock everyone’s socks off!”
Here’s hoping. We cannot wait to see what is in store for the 2019 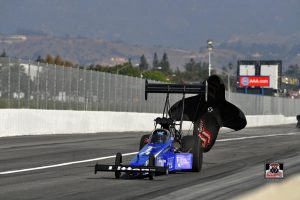 season. That’s a wrap for the 2018 Mello Yello Series. Leaving the finals in Pomona, the NHRA headed to Hollywood to celebrate the accomplishments of these amazing teams and officially crown the champions at the Ray Dolby Ballroom. It was a big night for Litton Racing. Driver Litton took home the Automobile Club of California’s Road to the Future award. He was awarded $20,000 and the Rookie of the Year title.
news