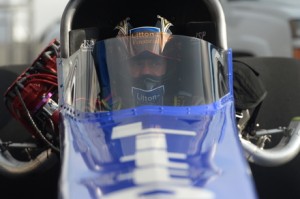 Team Litton Racing took to the quarter mile track one last time this year for the AAA Auto Club Finals in Pomona, CANovember 13-16. After a solid run in the team’s first race at Las Vegas the weekend before, the crew was popping with expectation. Looking around from teammate to teammate, it was impossible to not be caught up in the wave of excitement that surrounded the first day of preparations as Chief Brooks worked to calculate the tune-up!

In the first qualifying round the car launched hard with a tooth ripping 60 foot time of .92 but shortly thereafter the car went into tire shake and Driver Litton lifted.

On Friday during Q2, the track “didn’t like us!” Brooks emphatically stated. “Our car blew the tires off and so did the first five cars that went before us.”  However, the tires smoked and instantly re-stuck in the gumminess of the track, so Litton drove it to the finish line with a 6.36 at 234mph run. Due to the conditions of the track, the team rushed to make adjustments for Q3 later in the day. With only a few hours in between runs, the crew worked feverishly preparing the car for Q3 and trying to anticipate for the less than ideal conditions. 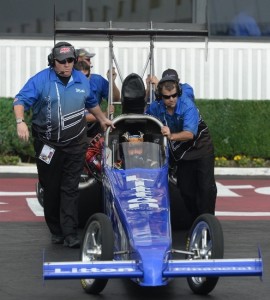 Q3, the team was a little gun shy. If Q2 was any indication, traction on the track was going to be tricky. Before the last chance to qualify, NHRA Safety Safari spent about 45 minutes improving the track surface. When Litton got up to the line, Brooks told Litton to “drive it like you stole it.” When the tree lit yellow, Litton slapped the throttle! He left the line well but experienced tire shake shortly into the run.  However, since this was the last chance to qualify, Litton pedaled the car in a desperate attempt to get traction but to no avail.

Long faces surrounded the crew as they went to pick up Litton and Blue Thunder at the end of the track. Disappointment turned into shock though when the crew arrived at the car. Inspectors at the finish line pointed out that the magnetos were hanging by the spark plug wires! Litton had driven it like he stole it!

Car owner Movie Mike, always quick with words, summed up the weekend by saying “when you are standing behind the car… the car goes 100 feet down the track and you can read what’s on the side, that’s not a good thing!” 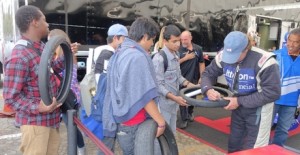 The team was out early, but that did not stop Litton from maintaining his reputation of being a great sport. When eager young race enthusiasts showed up at the pits after Q3, Litton put on a huge smile. The kids were thrilled for the driver to autograph wheels and hero cards. Litton could be seen writing “God Bless” on each of the personalized memorabilia. Long after a weekend of racing is over, these are the memories that are sure to be cherished by both Litton and the fans.

Team Litton Racing continued to create buzz around the track this year. Becoming more established and meeting new contacts, their progress is on a positive upward swing. There is a very short break and they are hoping to be back at the track for The Winter Nationals, February 5th – 8th, 2015 in Pomona, California. Litton is looking forward to the challenges and potential that lies ahead saying “Most of the other teams have raced all season, so for us to show up after 4 runs in Las Vegas and thump on them is probably not realistic. But who says dream small?”