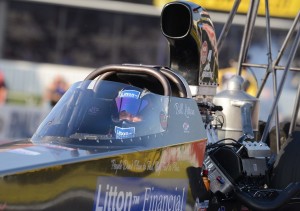 On Saturday, the team made one half-track run and two full track runs. The half-track run was a new personal best 60 foot time for Driver Litton of .911 seconds. This means that the car launched hard enough to reach 100 mph in the first 60 feet and lunge that distance in under one second. This run provided the data that Chief Meyer was looking for so crew members, Dan and Dalton, could service the car for its first full track run of the season.  The first “full pull” resulted in a 5.294 @ 272 mph.  The team was very happy with that as a starting point. Hoping to step it up from there, the crew prepped the car for the final test run.  Amazingly, it ran almost the exact same numbers… 5.290 @ 271 mph. Per Litton, “These were consistent runs! Feels good having these under our belt as we head to the Winternationals in Pomona.” A pair of 5.29’s pleased the team and stoked the anticipation as they changed their focus from testing, to pursuing the winner’s circle at Pomona the following weekend. 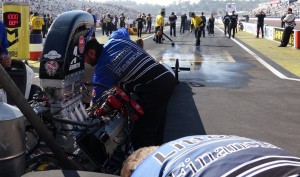 Coming off of the team’s successful testing in Phoenix, the crew only made minor changes to the car. Not underestimating the challenge of changes in the tune up window the team hoped to replicate their 5.29 in Qualifying Round #1 (Q1) and improve from there. However, the car didn’t react well to the different track and weather conditions. Thursday’s Q1 produced a 5.44 @ 262.23 mph, “dropping a hole or two” near the lights. Driver Litton and team landed in the #10 spot. 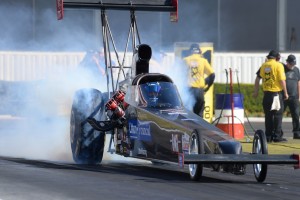 The crew worked hard Thursday evening and Friday morning to make adjustments including a lot of engine work and adding a little bit of timing to the finicky dragster; hoping to get back into the 5.20’s. Friday afternoon’s Qualifying Round #2 (Q2) brought a near-same Elapsed Time (ET) of 5.44 @ 245.18 mph due to some lack of power at the top end. Driver Litton commented, “Every team out here has the same goal of shaving their elapsed time into the 5.20’s and we are no different. The unpredictable challenge is to squeeze out that last bit of performance to make it happen on a consistent basis.” The team would have one more qualifying run on Saturday morning. Qualifying Round #3 (Q3) would be their final chance to improve their qualifying position. 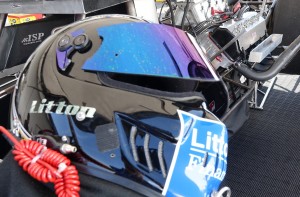 The crew tried something a little different Saturday morning by making some changes to the tune up, adding new tires, but leaving the timing alone.  Litton had to “pedal” the car due to tire shake at about 100 feet. The tire shake was so violent that it shook the 4 inch nitro fuel line loose from the fuel tank just behind the front wheels, spraying a steady stream of nitro onto the windshield and under the carbon fiber body of the car into the driver cockpit. Driver Litton reflected on the atypical run, “That was a wild ride! I got a nitro bath that seemed like it was coming from a firehose. Zero vision for a few seconds that seemed like an eternity. Nitro does a number on face shield material pitting it and cracking it to the point that it came loose on one side. Fortunately, it came loose on the right side of my helmet about the time the flow of nitro stopped and I could see the wall thru the opening. It was a relief to regain that vision, to keep the car away from the wall. The crew will have this corrected in no time!” 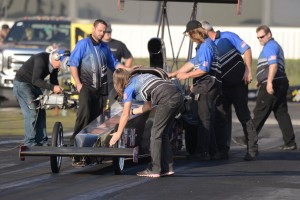 The crew went to work preparing the car for Elimination Round #1 (E1), just a few hours away. Driver Litton would face off against the number two qualifier hoping that the Phoenix results would resurface in time to earn the win light.  E1 was a photo finish. Unfortunately, Team Litton lost on a “hole shot” by six 1,000ths of a second, resulting in a margin of victory by the opponent of mere inches. Litton’s run of 5.34 @ 264.55 mph wasn’t quite enough to make it to the next round on this race day. Litton commented, “The fans came for a drag race and we gave them one. Randy, Mary, Ted, Dan and Kevin were relentless in their search for performance this weekend. I feel so blessed to have the opportunity to drive for such a talented team. Hopefully we can be six 1,000ths of a second on the winning side next time.”