Driver Bill Litton and the Worsham Racing team bring new meaning to the phrase “hot off the track” after their return from the JEGS Route 66 Nationals at the Route 66 Raceway in Joliet, Illinois. This event marked the 20th anniversary for the iconic race track and it will most likely be an experience Driver Litton will not forget. Co-Crew Chiefs, Del and Chuck Worsham, with crew members James, Todd, Mike, and Glenn, were excited to be a part of the celebratory weekend although they did not come away with the results they had hoped for 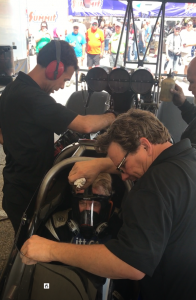 During the first qualifying run, Driver Litton was up in smoke right at the hit and clicked it off.  This was Litton’s 7th race in Top Fuel and 4th of this season. In all prior attempts, the Worsham Top Fueler qualified on the first attempt. With 2 qualifying opportunities left, the team was anxious to get back up to the line on Saturday.

Unfortunately, the Nitro beast smoked the tires at the hit again leaving the team unqualified with one final opportunity later in the evening. The team faced an extremely tight turnaround time to prepare for their next chance at qualifying. “We had some big thrashes and issues with time as far as turn around time between rounds. Our emotions were flying, but all in all we got it turned around,” Per Chief Worsham. Driver Litton brought the heat for the 3rd qualifying pass, literally

The car launched hard and seemed to be on a good run until Litton started to drop cylinders and the engine let go on the top end with a quick fireball hitting 4.15 @ 246 mph. This didn’t get them to the show and they will have to wait for the upcoming race for their next shot at the elimination rounds 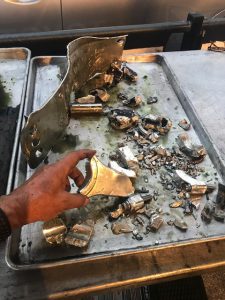 Litton was undeterred, “Chuck, Del and the team did an amazing job rebuilding our motor and getting us back to the starting line in a very quick turnaround. When the car launched, I thought we were on a good run but about 200 feet from the finish line it started to labor. In hindsight, I probably should’ve lifted. I was so close to the finish line and I thought we had a good chance to qualify, so I made the split-second decision to stay in it. I am bummed by the motor damage we sustained and that we still missed qualifying by a few 1,000ths. We want this so bad. We will come back stronger”.

“You can look back at a race like this and think, Hey, maybe this is a race you’d like to forget, but in reality, it is a race we probably need to remember. We need to remember our mistakes and the things that took place. I think we all learned something here. From myself, the crew, and even Bill. Bill did a great job driving. We had some trouble there in the last qualifying run. His instinct told him to do something and his emotion told him to do something else. It wasn’t his fault that he got put in that position and we can always do things to make us better”, said Chief Worsham. All eyes are towards Virginia as the team gears up for another weekend of Top Fuel racing when the NHRA returns to the Virginia Motorsports Park in North Dinwiddie, Virginia for the first time since 2009.  They are hoping there is no shortage of love for Team Litton Racing as they enter the Old Dominion and look forward to seeing what new highs the team can achieve!

The Virginia NHRA Nationals will kick off Friday, June 8th. The following weekend, catch the Litton Financial Dragster at the Fitzgerald USA NHRA Thunder Valley Nationals in Bristol, TN.  For insider updates and exclusive videos and photos, make sure to follow our Litton Racing page on Twitter and Facebook, like us on Instagram @teamlittonracing.

If you are interested in learning more about marketing partnership opportunities with Litton Racing, please contact us at info@littonracing.com .