Race fans came out of the wood works for the National Hot Rod Association’s Virginia Nationals at the Virginia Motorsports Park this past weekend. The fans brought amazing energy and packed the grandstands. It was a hot and very humid weekend but that didn’t stop the fans from showing up to witness the quickest accelerating race cars in the world. 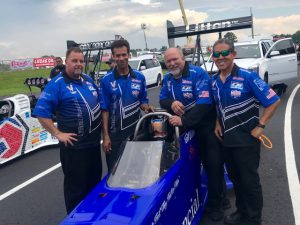 The sold-out event marked the NHRA’s return to Virginia and the good vibes were felt by Team Litton Racing and Driver Bill Litton. Once again Driver Litton joined forces with Worsham Racing to compete in the Top Fuel division. After a challenging weekend in Joliet, the team was ready for a new race day.

The Team, led by Co-Crew Chiefs Chuck and Del Worsham, crew members James, Todd, Mike, Brian and Glenn, got their first shot at qualifying on Saturday. Unfortunately, Driver Litton smoked the tires right at the hit of the throttle. “We had a tough start with tire smoke during our qualifying run, but Bill did a great job catching it and there was no damage to the engine. I was happy about that. We made some changes to the car on Saturday night and prepared for Sunday,” said Chief Worsham.

Qualifying in the bottom slot meant the first round match up would put Litton against the monster, reigning world champion Brittany Force in the Monster Energy dragster. 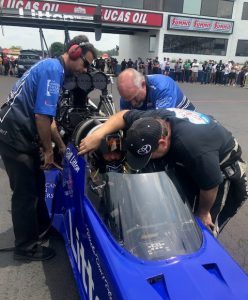 This was the first time Force and Litton faced each other in eliminations. Force with the starting line advantage was up in smoke early, pedaled it, but couldn’t get it to hook up. Litton was straight down the groove for the win. He picked off the 2018 World Champ with a 4.02, lifting shortly before the finish line. Per Chief Worsham, “Bill had to cut it off early, he knew he had won it. It was a nice first round win.” 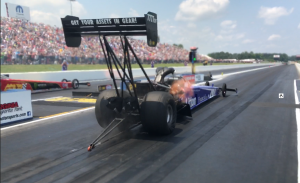 The next round brought another first time match up for Litton against the 3-time World Champion Antron Brown and would require a very quick turnaround for the Worsham Racing crew. Several crew members from other teams, including Scott Palmer and Ron Capps, jumped in to make the tight turnaround possible.  Brown made his quickest pass of the weekend reaching 3.86 @ 321 mph. Litton was dropping cylinders early and clicked it off. “The tire smoking runs were getting old, but a dropped cylinder kind of comes with the territory and we can work that out,” said Chief Worsham. Per Driver Litton, “In the first elimination round against Brittany Force, I saw my front wheels ahead of hers and then didn’t see hers anymore, so I was hoping we could hold on to the finish line! Antron in elimination round two was on a very strong run so I clicked it off to save parts since we are on a tight budget. When you put nitro in the tank and unleash 11,000 horses, anything can happen. We were able to make improvements in several areas, including some changes to reduce the probabilities of smoking the tires at the hit. It is awesome to see Chuck and Del analyzing the puzzle.  All things considered, I think we had a great weekend and are well-positioned for Bristol.” 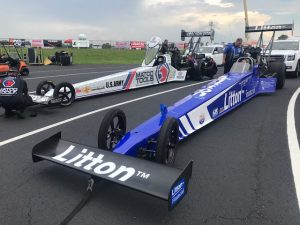 The Team feels great going into Bristol and they have definitely turned a corner. Per Worsham, “We didn’t want to do any damage to our vehicle. We’ve got Bristol next weekend and we are ready to give this another shot. I think we made progress. I think we are over the hump of the tires smoking now and we will get to work on making the car fast again. We are in the groove and everyone worked awfully hard out here in this heat. Hopefully our conversations about Bristol will be about winning more rounds.” After another successful weekend under their belts, these nitro junkies are off to Tennessee for more Top Fuel drag racing. The Fitzgerald USA Thunder Valley Nationals kick off Friday, June 15th from Bristol. Be sure to catch the national race coverage on Fox Sports 1 and get updates from the track on Litton Racing’s twitter feed. For insider updates and exclusive videos and photos, make sure to like us on Facebook and follow us on Instagram @litton.racing.

If you are interested in learning more about marketing partnership opportunities with Litton Racing, please contact us at info@littonracing.com .