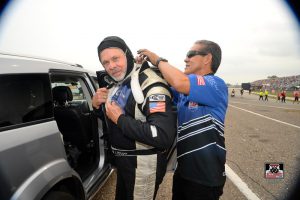 It was a beautiful weekend in the picture-perfect town of Brainerd, Minnesota. Located in Crow Wing County, The Brainerd International Raceway hosted the 2018 Lucas Oil NHRA Nationals over the weekend of August 16th-19th. The stop in Brainerd is one of the most memorable on the Mellow Yellow series tour due to the infamous campground “The Zoo”. Teams and NHRA fans enjoyed all the live bands, firework shows, bonfires, and memory making fun The Zoo had to offer. Team Litton Racing was happy to be there and to compete once again in the Nitro Top Fuel division, strengthening the partnership with Worsham Racing in hopes to advance. After the strenuous 3-week Western Swing, the team was rested and ready to put it all out there on the track 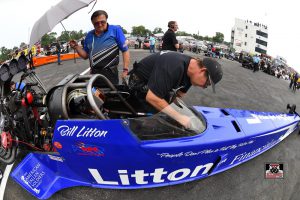 Litton made his first pass of the weekend in Q3 with a planned shut off after a 2 second launch to collect data. 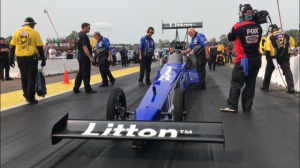 “We have to be strategic operating on our small budget. That 2 second launch was just what we planned in order to collect data, so we can throw everything we’ve got at the elimination rounds,” per Litton. 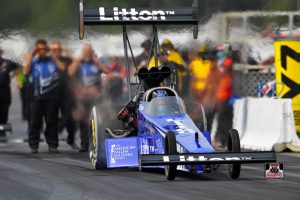 Co-Crew Chief Del Worsham, “I think it’s there. The car shows great promise and I think it’s time this team steps up to the next level”.

After a lengthy oil down delay with both drivers strapped in their cars, E1 brought on another match up against a beast, points leader Steve Torrence and the Capco Racing dragster. Litton was on a nice pass but Torrence pulled away after half-track on a strong 3.78 run. 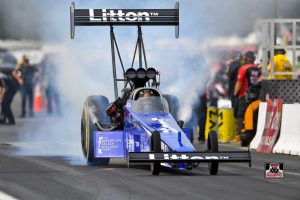 Team Litton had mixed feelings about the results. “It was definitely not a disappointing weekend, but we were disappointed by not winning any rounds,” said Chief Worsham. The Team was happy with their progress and feeling good about the opportunities to come, but it just wasn’t their race this time. 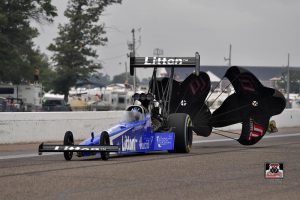 Per Worsham, “The confidence in the Team and in Bill, leaving Seattle and coming here is high, I can see it. They felt good about what they are doing and confident that they know what they are doing.
It was another great event. Bill is doing an excellent job driving. We’ve got to work on getting a better reaction time. I think most of that is in the car.” The Team has gained a lot of new fans out on the road this year and they are waiting to see them in the winner’s circle. 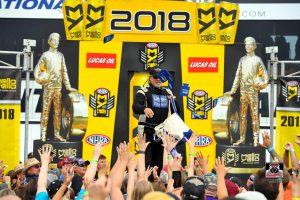 Per Driver Litton, “Steve Torrence came into this race #1 in the points so racing him was definitely like being attacked by a giant. Chuck, Del, and our team try not to give away anything and if they bobble, we will be there for the takedown.
He pulled away from us after half-track on what turned out to be a 3.78 run, so I lifted to save parts. With the budget we work with, our car has been pretty consistent in the 3.90’s on full pulls. We will keep Torrence on our ‘get list’.”

Brainerd was another great event and a wonderful weekend to add to the Team’s experiences for this year. Litton and the entire Litton Racing Team are looking forward to finishing out the 2018 Mellow Yellow Season and we can’t wait to see what is in store for them.