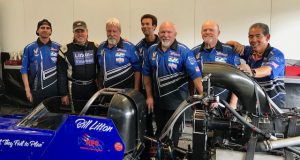 The 31st annual CatSpot NHRA Northwest Nationals went down at the Pacific Raceways Championship drag strip just outside Seattle in Kent, WA. The event rounded out the 2018 Western Swing, a 3-week long competition streak that creates unique challenges for the teams. With no breaks between the 3 events, the travelling “circus” must be well stocked with parts and supplies as there is no stopping from the high-altitude Rocky Mountains, to the California Wine Country, and finally the Great Northwest outside of Seattle. Team Litton Racing and the Worsham Family Drag team were ready to go full throttle as they approached the Western Swing finale. 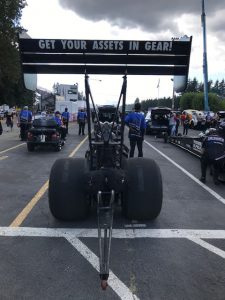 “Everything went smoothly at the warm up. Bill went through his routine at the start line. Got out of the hole well but shut off just a hair early. Ran a 3.97 @ 307 mph,” said James Williamson, a crew member with Worsham Racing, who focuses on cylinder heads and the nitro motor in general. “We were looking to go a bit faster, but not bad right out of the box to qualify.” 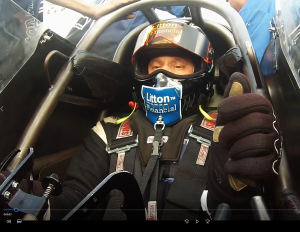 Even though he was reaching speeds at over 300 mph, time stood still for a moment for Driver Litton when the parachutes failed to deploy. With only a fraction of a second to make his next move, Litton was able to get the car stopped from 307 mph without chutes and make the turn into the shutdown area without a problem. “It was a very intense situation… I swung at the parachute handle three times and couldn’t get the chutes out. We are traveling about 500 ft per second at the finish line. Depending on the length of the shutdown area, we have seconds to stop the car before the sand trap and catch net. It seemed like slow motion until I saw the track attendants start to scatter. That’s when I knew that the pressure cooker was heating up,” Driver Litton said. 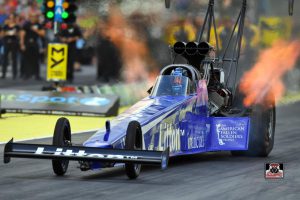 “The chutes are deployed by your right hand and so is the brake. Since the chutes are way more effective at stopping the car than the brakes, that is where you go first. The dilemma becomes: when do you stop using your right hand from working the chute handle to grabbing the brake handle. After three swings and no parachutes, I knew it was time to stop working the chute handle and grab for the biggest hand full of the brakes I could get,” said Litton. Just as if he was a ball player back on his feet after being knocked out, the fans went wild cheering for Team Litton and crew as he was towed past the grandstands back to the pits. “It gave us all a scare for a few while he was bringing the car to a stop with the brake. But all was well,” said James. 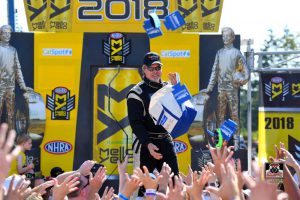 It was back to the pits for the evening as the Team prepared to pull everything apart. After a solid run, the engine looked great but softer than hoped for on performance. Per James, “We knew we had some room to tweak the car up for Sunday’s eliminations after qualifying with the rest of the heat”. After adjustments to the parachutes for the next race, the crew got into the clutch timers and flow jets to try and speed up the car for a fighting chance against a big shot, Doug Kalitta and the Kalitta Drag Racing Team. “With Chuck’s blessing, we made a few tweaks to try and make the car go a little bit faster for Sunday morning,” said James. 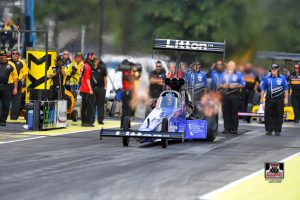 Litton was neck and neck up to half track, but unfortunately, Kalitta was on a great run and pulled away after that. Per James, “Bill knows that once he sees the opponent get out too far to catch and the win gets out of his grasp, go ahead and lift to save parts for the next battle.” Litton had a good clean run with 3.99 @ 285 mph, getting out of the throttle about 200 feet before the finish line.
Crew Chief Chuck Worsham noted, “Comparing the changes we made from Friday to Sunday, the car ran about the same. We are going to have to go through and diagnose our clutch system to see if we have a line clog or maybe too small of a line. We wanted to go a lot faster.” The crew got the issues straightened out with the car this weekend and they are ready to get back after it for the Lucas Oil Nationals in Brainerd, Minnesota. The Top Fuel competion kicks off Friday August 17th. 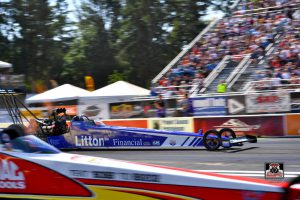