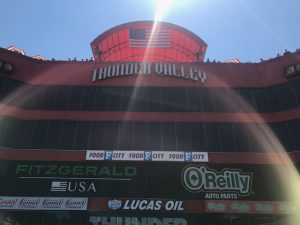 Bristol, Tennessee might be well known for their country music, but the sounds of nitro drag racing were all that could be heard throughout Father’s Day weekend when the NHRA rolled into town last week. 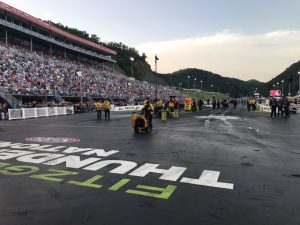 The Bristol Dragway is widely known as “Thunder Valley” due to the acoustics created by the track’s location between two mountains and The Fitzgerald USA Thunder Valley Nationals are a fan favorite every year.

The season might have been just on the edge of Spring, but the hot Summer weather had already arrived in Bristol.

The teams were put to the test on a very hot track. Driver Bill Litton and the team lead by Co-Crew Chiefs Chuck and Del Worsham, crew members James, Todd, Mike, Brian, and Glenn, were happy to take on the challenge.

“The hot weather brings on very tricky conditions,” per Chief Worsham. These high-powered nitro cars struggled with the hot track and blistering heat.  Saturday brought relative humidity down to about 38{97b644b07d318a73d8bce15dd0b5296cc4e330d3e9b7befa330643f6e455b291} and track temperatures to 130 degrees. 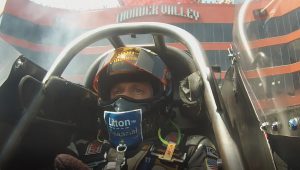 In Q4, Driver Litton launched straight down the groove with a good clean pass reaching 4.11 @ 302 mph. The Litton Financial Dragster landed in 13th place moving into the elimination rounds.

The first elimination round brought a matchup between Litton and Driver Scott Palmer. It was the first time these two have faced one another in an elimination. Driver Litton dropped a cylinder and was edged out in a close race with a 4.17 @ 261 mph. “We came up for elimination round 1, Bill was definitely up for it. He had a great reaction time, we put up a good race,” per Chief Worsham.

Per Driver Litton,“Thunder Valley Raceway and Bristol fans are fantastic. We only had one shot at qualifying and threw down an awesome run at the last possible opportunity in Q4. It was exciting to hear the fans calling that a ‘bonsai run’ that put us in the number 13 spot. Our team is hungry, and we will be back on the track as soon as possible trying to conquer these giants.”

“We have really made some great improvements out here,” said Chief Worsham. “You can definitely see that everyone has really come together and everyone on the crew has really gelled.” The Team is looking forward to the second half of the NHRA season and getting into the perfect position to win a race. Up next, the historic NHRA Western Swing kicks off with the Mopar Mile-High NHRA Nationals at the scenic Bandimere Speedway in Denver July 20th – 22nd. The Team will then head to Northern California for the Toyota NHRA Sonoma Nationals at the Sonoma Raceway July 27th – 29th, then finish the Western Swing near Seattle at Pacific Raceways with the NHRA Northwest Nationals August 3rd – 5th. There is much more racing for Team Litton Racing to look forward to and all eyes are on getting that Wally.
Through June 11th, Virginia broadcasts collected 842K viewers of the Virginia Nationals with Sunday’s finals being the highest rated program of the day on FS1. For the week of June 5th – June 11th, the race had 9.31 million social media impressions. If you are interested in learning more about how you can be a part of the action and would like information about marketing partnership opportunities, please contact us at info@littonracing.com. For insider updates and exclusive videos and photos, make sure to follow us on twitter, like us on Facebook, follow us on Instagram @litton.racing.
news