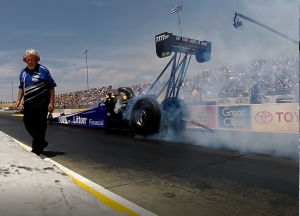 Team Litton Racing was back on the track last weekend, joining forces with Worsham Racing, Inc. to compete in the 31st annual Toyota NHRA Sonoma Nationals at Sonoma Raceway.  After a hot weekend at Mile-High in Colorado, Driver Bill Litton and Co-Crew Chiefs Chuck and Del Worsham were ready to get back to their home state of California to take another shot at a Wally in the Nitro Top Fuel division.

“The growth of this event over the last few years has been nothing short of phenomenal, and we are so appreciative of all our fans who came out to join us and enjoy this amazing show,” said Sonoma Raceway President and General Manager Steve Page (source:www.NHRA.com). And an amazing show they got! 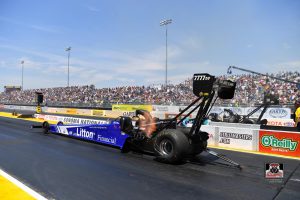 The Litton Financial Dragster made its first run of the weekend in Q3. Crew members James, Todd, Mike, John, Glenn and Jacob had the Blue Thunder tuned up and ready to launch aiming for a great qualifying position.

Driver Litton’s first and only qualifying pass of 4.05 @ 251 mph made for a solid first run moving them into the next day’s elimination rounds. Per Litton, “We were on an awesome run until the blower belt came off shortly before the finish line. If the belt had hung on, that run probably would’ve been in the 3.80’s”.

Elimination rounds kicked off Sunday morning and brought Driver Litton up against the 2nd place qualifier Leah Pritchett and the Palomar Builder’s Top Fuel Dragster. It became an instant victory for Driver Litton when last week’s event champion Pritchett hit the throttle early activating the red light, giving Litton the first-round win. “We’ve been waiting for something to go our way and to be there to capitalize on it. In the first round when Leah Pritchett had some trouble, Bill kept his cool and had his best reaction time of the year driving the Top Fuel car and was able to pull off a good upset win in the first round. We are proud of him to pull off an upset win like that”, said Chief Worsham. 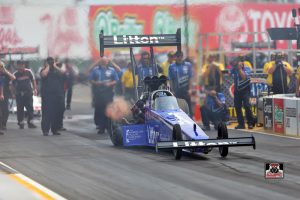 With an elimination round 1 run of 4.16 @219 mph, Driver Litton with the upset advances to the next round. Per Litton, “Our hot rod nosed over just before the finish line due to an electrical connection over the burst panel coming loose. We will definitely have that beefed up for the next round.”
Elimination round 2 brought on a familiar match up for Litton this season, 7th place qualifier Scott Palmer. It was a quick turnaround between rounds for the crew to rebuild the motor and get back to the starting line. Driver Litton was on good pass, but Palmer pulled ahead by about a car length after halftrack. Litton clicked it off early to save parts for the next battle. 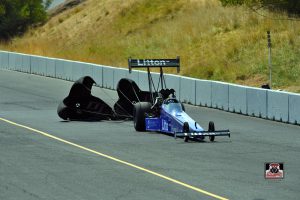 With progress being made in every single run, I think we are in a position now where everyone is ready to take the next step and really get this car in a position to compete for the win. I know personally, I think Bill is ready. As a driver he has come a long way and is ready for the next step. I know for me, as a team owner, we all trust in the team and a lot of work has been done in the first half of the season. Looking forward to the rest of the season and more opportunities that go our way. We want to put Bill in the winner’s circle”, said Chief Worsham. It was a great weekend for Team Litton Racing and they are looking forward to closing out the Western Swing competition next weekend in Seattle, WA. The CatSpot Northwest Nationals kick off August 3rd at the Pacific Raceways. The Team gained a great amount of experience competing in these elimination rounds, and they are ready to take on more giants at the next race!
Be sure to check in on Social Media for live updates from the track. If you are interested in learning more about how you can be a part of the action and would like information about marketing partnership opportunities, please contact us at info@littonracing.com. For insider updates and exclusive videos and photos, make sure to follow us on twitter, like us on Facebook, follow us on Instagram @litton.racing.
news